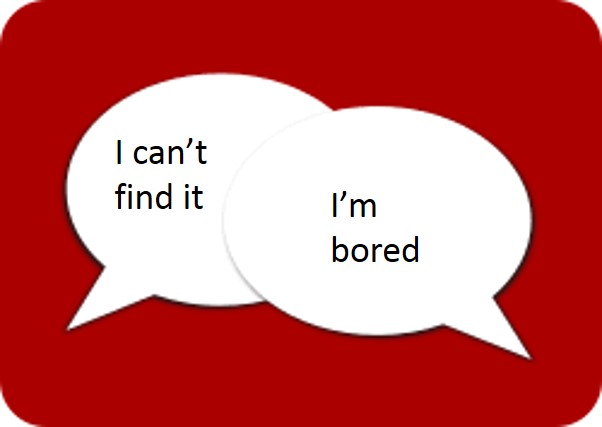 “I’m hungry.”
Ok, at face value this isn’t annoying at all. Let’s offer a bit of context. You’ve made dinner. You’ve served dinner. The kids picked over dinner. You clean up after dinner. Kitchen’s closed. Kids brush their teeth, climb into bed, lights off. And, you hear it. “I’m hungry.” Extremely annoying.

“I’m bored.”
The kids have books, board games, electronics, toys, each other and they have the nerve to be bored? Don’t you wish you had the luxury of being bored? Oh, but here’s the salt in the wound. You get involved and make suggestions, “why don’t you guys go play [fill-in-the-blank].” But it doesn’t matter, no matter what you recommend it’s not going to be a good idea. They’re not going to want to do it. So, they’ll follow you around, muttering about how bored they are. Just plain ole annoying.

“I’m tired.”
How dare they? They have no idea what “tired” is. And, it’s no coincidence that this is usually their rebuttal to you asking them to do something. “Can you pick up your toys?” “Can you take the garbage out?” Annoying.

“I don’t like that.”
Doesn’t matter that they’ve never tried “that” before and really have no idea whether they’d like it or not. They just somehow know they don’t like it. Or, the really annoying twist. Your toddler used to love bananas. He used to eat one every morning. Then one random morning you give him a banana and boom. Suddenly he doesn’t like them anymore. How annoying.

“Can you buy me that?”
The 30 second commercial was hardly enough time for your kid to know what “that” is. But he has to have it. Just like he had to have the last thing that now lays under his bed, with missing pieces and half broken. Annoying.

“But, mom”
Does this even require an explanation? But stay strong mom, this is a kid’s go-to strategy, they know if they just say this a million times, on the zillionth time you’re likely to give in, if for no other reason then to get them to stop staying “but, mom”. Beyond annoying.

“Why?”
We may act like we know everything. But we don’t. And, even when we do know the answer, how do we explain to a five-year-old the concept of daylight savings time. Annoyed at the question and annoyed we can’t answer it.

“Mom”
It’s the most precious word to hear when your baby is just learning to talk. Fast forward a few years. There isn’t just one kid, you now have a few. You haven’t had a decent night’s sleep in years. You can’t remember if you showered and you’ve been wearing the same yoga pants for 3 days. You hear that chorus of “moms” literally every waking second of every day. Well, as harsh as it sounds. It gets annoying.

What annoying thing did your kid say today? Go ahead and confess in the comments below.

Like these mommy confessions? Check out Confessions from moms who lie. All the time.

Want to laugh, vent and connect with mom friends, check out the game that keeps moms laughing 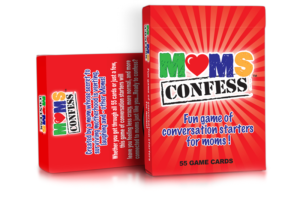